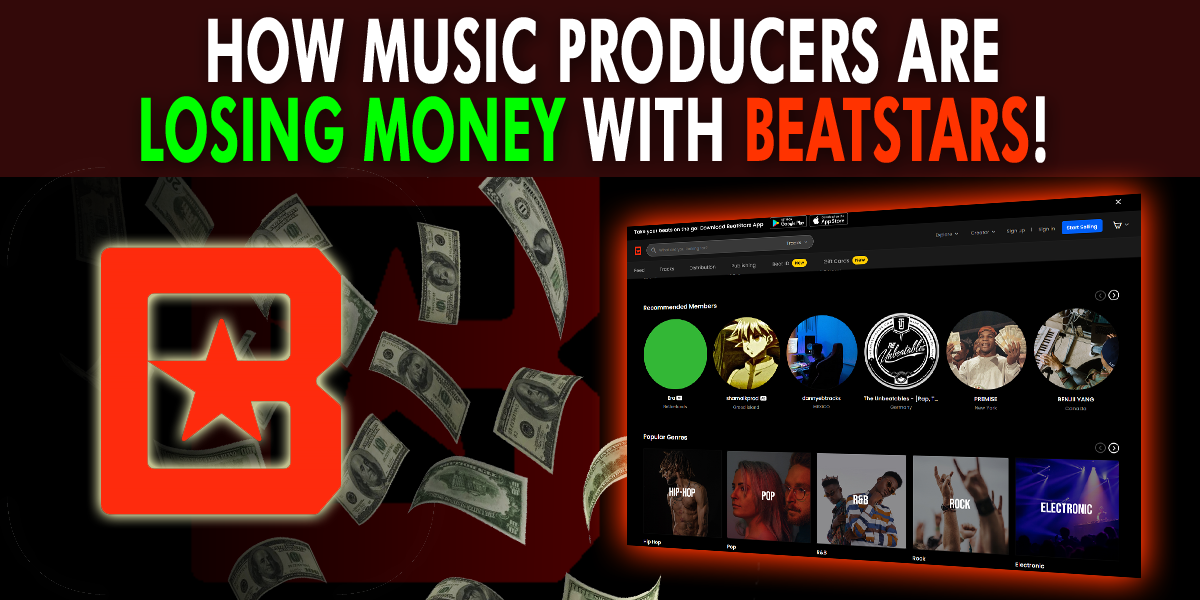 How Music Producers Are Losing Money With Beatstars!

Many music producers will never know how much they play a part in the success of many music production websites. It’s so subtle that many never pick up on how they are losing money. Big websites offer you so much upfront that you don’t pay attention to how you play a major part in a wealth-building system that doesn’t include you. For Short, someone else is getting rich and not you. My point in this article is to share how you can notice the difference and then put yourself in a better position to gain more of the wealth you deserve as a result.

Even though there are a few big beat websites on the market, I will take one of the biggest, which we all know as BeatStars, and focus there. BeatStars was formed in 2008 and started to build momentum fast by 2010-11. The site has grown to host thousands of music producers and has sold to millions of artists from around the world. You would think because it was built on the backs of music producers and their music production that the website would give back more in return, but it doesn’t. Don’t get me wrong, over the years BeatStars has opened the doors for producers to invest and gain shares in the company. However, I believe at large it may have failed to fairly compensate the ones who count the most. THE MUSIC PRODUCERS THAT CONSTANTLY GROW THEIR MEMBERSHIP AND PROVIDE THE CONTENT!

How Music Producers Are Losing Money Daily with BeatStars?

As a music producer on BeatStars, you are provided with a link that will be the address/location for where your beats can be found. You can upload hundreds of beats and then start sending traffic to your beats. This is a good thing since you are now amongst a community of great producers and the race is on to start getting your beats sold. However, it’s an even greater thing for BeatStars since they figured out a way to get you to send traffic to their site and not pay you or reward you in any way. Yes, you can sell your beats, but what about the people you send to BeatStars that don’t buy your beats. What if they subscribe to sell their beats or buy another music producer's beats? Do you get anything for your efforts? Who’s really getting wealthy from your efforts? A few good questions to ask yourself!

Here is the Big Problem!

What if somehow you discovered that as you were promoting your link in your YouTube description, you had 100 music producers sign up to BeatStars that clicked your link. Maybe somehow you discovered since you had your link in your Instagram bio, 200 Artists clicked on it, but didn’t buy your beats, they purchased beats from other music producers on BeatStars. That would probably bother you if in fact hypothetically you discovered that $5000 worth of beats were purchased because of your Instagram link and not one of the beats sold was yours. Last, imagine if you were able to get 40% of the $19.99 a month from the 100 producers and of the $5000 worth of beats sold, you would have been compensated 30%($1500) since it was you that sent the buyers to BeatStars. Well, no need to be mad that you were making others rich, it was the past. What you want to do now is read on to see how a new beat website has solved this problem for the music producer community and allows you to hustle smarter.

Here is the Answer to the Big Problem

Let’s keep it real. Not everyone you send to listen to your beats will buy them. This is where the new platform, BuyBeats.com, helps you leverage your time and helps you build an additional income stream while you are promoting your beats online. Which you are promoting your beats anyway. The 40% monthly commissions you lose at BeatStars and other big beat websites, BuyBeats.com pays you. Doesn’t matter If you have 1000 producers that sign up under you. For every subscriber who signs up because of your link, you get 40% of their payment each month. That $5000 that you were the reason for because of the traffic you sent, will now get you 30% of the profits on BuyBeats.com. The best thing about it all is when someone signs up as a member because of you, they become “Your Customer” for the life of their membership. Every time they spend you get paid!

As a part of the music production community for over 25 years, I say it's time we build smarter and stop leaving money on the table. This time around is a site that is giving you exactly what the other big sites won’t. A legitimate profit share for doing what you are already doing, Promoting Your beats! Give BuyBeats.com a try today and make the system work and payout better for you.