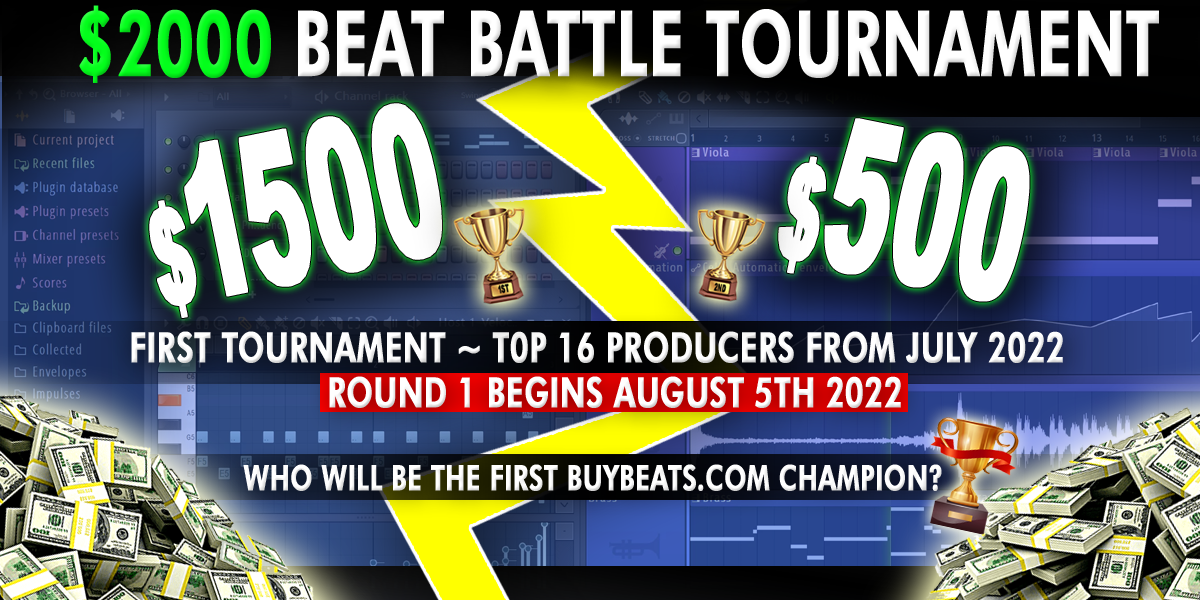 It's finally here. The first of many tournaments going down on BuyBeats.com. The top music producers who rank in the top sixteen for July will battle it out. The cash prize of $2000 will be split between first and second place. The first placed producer will be crowned the first BuyBeats.com Beat Battle Champion and take the $1500 cash prize. Second place will receive $500 cash.

Beat battles have always been a thing to encourage music producers to step their game up. As a company, great beat battles are what we look forward to providing. These battle events bring out the best of those who participate as well as those who listen and get inspired to be better.

If you are a music producer and want to sharpen up your skills, don't hesitate to jump right in. You never know who will slip up and not bring their "A" game that will allow you to advance to the next round. It's only recommended that you come to the battle with all you got, so you give yourself the best chance at walking away with the grand prize!

Tournament rules.
~ You are not allowed to battle any beats that were previously uploaded to BuyBeats.com
~ You may be asked to provide the stems to your beat if there is anything in question.
~ You must upload your beat when the round starts or you forfeit the battle.
~ Battles can only be voted on by Members and Staff Members.
~ All beats can be of any style that is considered Hip Hop overall, there are no specific categories or genres for this tournament. Once both beats are submitted, the beats are available for everyone including both producers to hear.
~ You are allowed to use samples in the beats you battle.
~ One beat per round. This means no drastic change-ups in your beat where it sounds like a totally different beat in the same round.

We look forward to hosting this beat battle tournament. If you think you have what it takes to walk away with a cash prize, start battling your beats now before the end of July. You never know who you may take out to win the cash!